This will be our final blog entry.

The reason why we started the blog was to be able to let our family and friends in see what we were doing and to confirm their thoughts that we were completely mad – I think that the blog really did substantuate what they already knew – but it was set up for that purpose.
In our mind it was about our adventures on the waterways and the time between when we started and when we were to finish (which is now).

Tomorrow I will be boarding the flight to go home to Melbourne (this time it will be with Royal Brunei Airlines) and be land based again, our life on the boat will be such lovely memories and behind us; not so the people we have met; the experiences we have shared together and with others; the places and events that we have seen; the fun and the sadness.

There are a number of people whom we have met on the canals who are no longer with us and we are very saddened because of that, but we can recall their faces and the good times that we have shared with them; we can hear their voices and the experiences that they have shared; the knowledge that they have passed along to us – we miss them all; our lives have been enriched because of them and their friendship.

But the nature of life is that we must keep changing; keep evolving; moving on; we have more goals on the horizon that we will pursue, but as I have said previously, our immediate concern is the on-going welfare of Diane’s mother.

What will we do in the longer term?
We have seen a fair amount of Australia already – from Cairns in the north, all the way around the coast as far as Adelaide; we have taken the train across from Sydney to Perth and been south of there through Fremantle and Bunbury and to Margaret River; we have see Rottnest Island and the quokkas; visited Tasmania few times, but we have not seen the middle through Alice Springs and to Darwin; not yet been to the north-west; so there are a couple of places left for us to visit.

We also want to see a lot more of the and and spend more time with Mitch and Sara in LA and of course with Sam in and Rebecca in .

We want to again enjoy the sights and sounds and tastes of which we think are worthy of a visit from everyone – has a soul and a heartbeat and a life and a personality which runs deep and not simply sitting on the surface.

I am pretty sure we won’t be lost for things to do.

What will we miss about life on a boat?

The people – it is always the people that are the soul of the canal system – some we have just fleetingly said hello to and others we have been in almost constant contact with – in between there have been random discussions, a chat whilst we walked the dog, over a beer in the pub – there are people with real character about them; others who can get quite opinionated; and still others who simply just want to be on their boat.
And please no mention of batteries and toilets!

The canals themselves – there are some real brutes out there and others that just seem to glide by under the boat. Is there a favourite? – a bit like asking a parent about a favourite child – the canals are like children in a way, in that they all have their own character, their own persona – and on each we all have our favourite mooring spots for whatever reason that may be.

Just simply life on the water in general – there is so much freedom to do as you want and still keep to the rules which are in place for the benefit of everyone.

The best places we have visited? We have loved being moored in the docks in Liverpool and being so close to the city, but also Castlefields in and in or in – being able to visit these wonderful cities and moor in the centre has certainly been something to remember.
Equally though, we love the rural areas as well – some of the views across the Pennines on the Leeds and Liverpool Canal; or the undulating hills of Northhamptonshire; the upper reaches of the Thames (away from the large cities and towns); the River Trent which is all rural below Newark; the Shroppie is a real treat as well; or simply the authority of the Grand Union.

Things that we will not miss.
The increasing trend of some boaters – and I cannot classify that into new/old, young/old, hirers/owners/shared boats – to ignore the traditions of the canals (or at least the ones that we learnt about) – helping others at locks; close gates and paddles; slowing down past moored boats; following the etiquette of canal users.
People who want to disregard the rules in place for everyone to benefit, simply because the rules do not suit them and they want to try and always get around them. If you are a continuous cruiser (as we are) then obey the requirements – if not then go into a marina; if you have a boat then pay your licence, if not then get off the water; don’t stop somewhere and think you have a right to stay there for years simply because you work in the area, or have kids going to school, or any other reason; abide by the requirements to be allowed on the waterways.
We will not miss those cyclists along the towpath who think that they own it and speed along with complete disregard for others and churn up the path – for heavens sake slow down and use your bell.
I don’t have too many problems with anglers – sure there are some who don’t want to make eye contact and think that a boat going by is disrupting their fishing time, but on the whole they are usually quite friendly and enjoy a bit of a chat like anyone else.
I will especially not miss the classification of everyone that seems to happen in this country – talk to many people of British heritage and they will invariably fall into the habit of saying something about any group of people who may be from any country you wish to name and tar everyone from there with the same brush or people from a certain town or city. Not all people come to this country to get benefits, or abuse the NHS system, or cause mayhem – in fact the vast majority, of those we have met,  are looking for a better way of life and enter the UK in a perfectly legal way and live their lives according to the laws of the land.

We have met so many people from so may different countries who, like us, simply want to work hard and support their families and enjoy their lives in peace; on the other hand we have seen a number of people who described themselves as British (or usually as English) and want to blame everyone else for their own problems and in a less than peaceful manner.

We are all here together to be part of a larger picture – there are no reasons why we cannot all live together in peace.

We will still be reading the blogs of boaters (can’t say other boaters any more) to see what they are doing and where they are going; we will remember with happiness the places that they visit and where we have also been; we will try to catch up with who we can we we come back to this country in the future; and we will stay in contact with as many as we can.

The contact line on the blog will stay, so if you want to let me know of your email address then send me the information as a comment to the blog and we will be back in touch to you.

If there is one thing that sums up our life aboard for the past seven years it is that we have learnt to slow right down and become more relaxed about the things that go on around us and to become much more tolerant of other people. 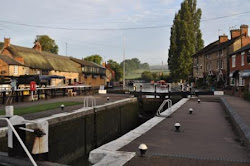